The Moscow Urban Forum was held in Moscow on December 5-7. 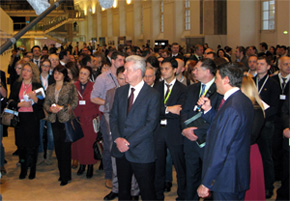 This is an international conference in the field of town-planning, urban studies and related disciplines. The forum was established as a single, sweeping discussion platform facilitating equal dialogue among experts, investors and potential partners interested in the implementation of various projects in the field of Moscow infrastructure development.

The key topic of the forum in 2013: "Megalopolises: Development Beyond the Downtown Core.” The forum was held under the auspices of the Moscow City Government in cooperation with the World Bank. This year, event participants included: Sergey Sobyanin, Mayor of Moscow, Igor Shuvalov, First Deputy Chairman of the Government of the Russian Federation, Elena Chuguyevskaya, Director of the Department for Strategic Development and State Policy in the Sphere of Territorial Planning of the Ministry of Regional Development of the Russian Federation, Edkham Akbulatov, Mayor of Krasnoyarsk, Maurice Leroy, Minister of Grand Paris Urban Development (2010-2012), France, Willy Muller, General Director of the Urban Infrastructure Development Agency – Barcelona Regional, Spain, and many more world experts in the area of urban studies.

The Third Moscow Urban Forum "Megalopolises: Development Beyond the Downtown Core" emerged as an international expert and educational platform for sharing practical experience and ideas. Forum participants focused on interaction among the authorities, business and citizens, tax instruments for the development of megalopolises, the architectural appearance of the modern capital, the design of public spaces and many other relevant topics.

EGO Translating Company provided linguistic support for the entire event, including the consecutive interpretation of Sergey Sobyanin, Mayor of Moscow, and Marat Khusnullin, Deputy Mayor of Moscow at the Moscow City Government on issues of town-planning policy and construction. During the forum, our highly-qualified experts interpreted from/to English, Chinese, French, Spanish, Turkish and German.

The manifest of the Moscow Urban Forum is available at the  website of the event: s-t-r-o-y.ru/manifest/