The International Conference and Exhibition "IT in Transport "Infotrans-2013" has ended. The event took place on November 5-7 in St. Petersburg. 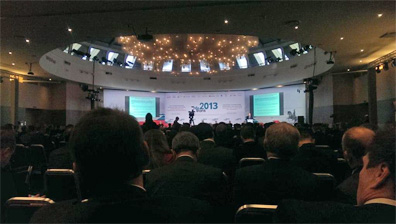 The conference annually gathers professionals in the IT field from CIS countries, the Baltics and Europe. In 2013, Infotrans guests included more than 600 delegates from 14 countries and 270 organisations. The general partner of the event was JSC RZD, and the organiser was LLC Business Dialogue. CJSC EGO Translating Company was the official linguistic partner of the event.

The main topics for discussion this year were as follows:
• electronic document circulation in the transport business;
• railway statistics;
• methods for evaluating IT investments;
• efficiency of ITSM tools in solving issues of production management, ITSM market in general;
• training of specialised resources, etc.

Alexey Illarionov, Vice President, IT and Management System Development, JSC RZD, shared his opinion on the concluding event and its many topics: "Thanks to the conference, new ideas and projects are appearing on a regular basis, and the efficiency of their implementation depends on our coordinated actions."

The exhibition of IT achievements in transport was open during the event. The developments were presented by leading Russian and foreign companies:
• AISA IT-Service LLC presented a universal software platform for mobile devices with the application of a qualified electronic signature aimed at the automation of staff activities in various departments of transport companies. Alexey Sopov, Implementation Group Manager, discussed the development: "The platform is multi-functional – it can be entered with data on both completed and scheduled work, and it features the option of connecting external peripheral devices."
• Microsoft RUS LLC demonstrated its line-up of Surface tablets with updated software;
• Hewlett-Packard presented a printer listed in the Guinness Book of World Records as the fastest in the world. Its printing speed is up to 70 pages per minute.

At the end of the conference, an award ceremony was held for the winners in the competitions "For the Best Analytical Economic-Statistic Work at the Corporate IT-Penetration Departments of JSC RZD Railways as of 2012" and "Best Operator of the Operational Engineering-Recording Centre for Traction Rolling-Stock of JSC RZD Railways."

The XVIII International Conference and Exhibition "IT in Transport Infotrans-2013" demonstrated growing business interest in increasing labour productivity and reducing costs with the help of the implementation of new technologies in the transport sector of the economy.