Is language business done differently in Russia? The answer is yes — to some extent. Translationrating.ru surveyed over 100 leading language service providers (LSPs) from Russia and Ukraine and released a report based on their yearlong 2013 results. 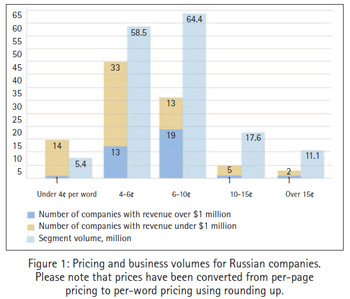 Ten translation companies with revenues of over $5 million to $10 million were identified, some of which do not appear on Common Sense Advisory’s global ranking. Together, the providers that took the survey made over $162 million in 2013, and the total size of the language services market was estimated at more than $627 million.

Growth was generally steady but slow in 2013. Top earners Janus Worldwide and EGO Translating increased their revenue by only 6%, which is half a percent under the inflation of the national currency. Some others developed at a faster pace — 15%, 18% and even 43.5% — but the overall results show more and more signs of deceleration. None of the LSPs launched after 2008 have made it to the national top 30; plus there are increasing numbers of business owners interested in selling their companies.

Compared to their Western European and US counterparts, LSPs in Russia have lower revenue per employee, about $54,000, but maintain better profitability — almost 27% before taxes on average among the companies that agreed to share this information. Moscow and Saint Petersburg-based providers typically had higher revenue per employee than competitors outside capital cities, but profits did not otherwise correlate with location. Most probably this means that LSPs from towns sell services cheaper, but pay their translators less and try to have a smaller overhead to maintain margins.

The pricing poll of 102 companies showed that LSPs that sold translations at a little above the average price got the biggest amount of business. At the same time, those selling the cheapest services received ten times less business than the next group did (Figure 1).

The survey yielded interesting findings in regard to technology (Figure 2). According to the 108 responses we received, SDL translation memory tools dominate the market by far, probably in no small part thanks to having a specialized local company as a reseller. It’s a similar trend with the runners up. Vendors that localized sales and marketing into Russian had more clients among leading Russian LSPs. For instance Memsource, which has a Russian website, is the second most utilized tool among the companies in the survey, marginally more popular even than memoQ. The rule “can’t read, won’t buy” often cited by translation companies applies to them as well, as managers are more likely to purchase tools explained in their own language. 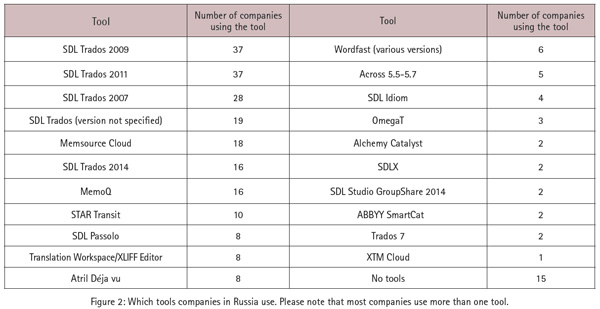