The VII International Forum "Transport of Russia" has ended. The event was held within the scope of "Transport Week – 2013" (Moscow). 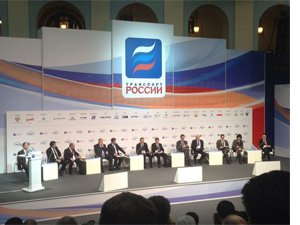 The plenary discussion "Transport of Russia: Investment Policy Outlines" began with a welcoming speech by Sergey Ivanov, Director of the Administration of the President of the Russian Federation. He delivered the official welcome address of Vladimir Putin, the President of the Russian Federation, who in turn noted that the priority objectives of the industry include the large-scale upgrade of infrastructure, highways and railways, air, marine and river transport.

At the beginning of the forum, participants discussed issues related to attracting private investments for projects involving the upgrade of transport infrastructure. The following people took part in the discussion: Maxim Sokolov, Minister of Transport of the Russian Federation, Igor Levitin, Chairman of the Committee for Issues Relating to the Property of the State Duma of the Federal Assembly of the Russian Federation, Sergey Gavrilov, General Director of the Russian Direct Investment Fund, Oleg Sienko, General Director of JSC Scientific and Production Corporation Uralvagonzavod, Andrey Sharonov, President of the Skolkovo Moscow School of Management, and many more.

EGO Translating Company was the official linguistic partner of the event, providing simultaneous and consecutive interpretation during the forum. Interpreters specialising in the transport industry interpreted in the "Russian/English" language combination (the term "language combination" means languages to interpret or translate to and from).

Within the forum, participants discussed relevant topics in the transport industry: attracting investments, actions to support the development of public-private partnership, and many more. "Transport Week" is an annual business event that includes a series of All-Russian and international events on the transport agenda. This year, more than 2,000 delegates participated in the forum.