Major Milestone in the Event Industry

29.01.2016
On January 22, 2016, two major milestones in the event industry concluded: 5th Europe+Asia Event Forum (EFEA) and Forum Event Live 2016 , organized by Group of companies "RESTEC". The events were held at the same venue in order to ensure maximum convenience and comfortable interaction among the participants. 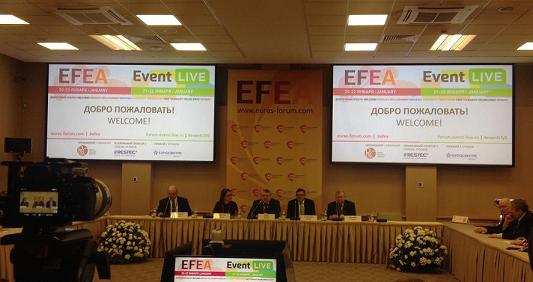 EGO Translating Company was the official interpreter of the business and cultural program.

The events were held under the patronage of the Chamber of Commerce and Industry of the Russian Federation and with the support of the Russian Union of Exhibitions and Fairs, the Saint Petersburg Convention Bureau and the Russian Association of Communication Directors and Corporate Publishing.

The key topic of the Forum was “Marketing in Modern Realities. Events as an Effective Marketing Tool.”

The event was attended by over 450 experts from the event industry and incentive tourism, organizers of exhibitions, forums and conferences who came from 25 constituent entities of the Russian Federation and 26 countries around the world.

During the first day, discussions touched on Saint Petersburg’s prospects for further development as a destination in current economic conditions, matters of event sponsorship and partnership, major aspects that should be highlighted when holding tenders and bidding, and means of attracting visitors to events. It should be noted that, within the framework of the panel discussion, it was announced that leading Russian and foreign experts of the event industry had decided to celebrate “World Convention and Exhibition Day” annually on the 8th of June. An extended session of the RF CCI Committee concerning exhibition and fair activities was held. In the course of the session, results of the work done in 2015 were presented; various approaches to the industry’s development were proposed, and the appropriateness of state support for exhibition and fair activities was discussed.

At the end of the first day, the laureates of the 2nd annual EFEA Awards 2016 were presented and the laureates in 5 nominating categories were decided: “The Best Venue” in 2015 was The Exhibition of Achievements of National Economy (VDNH) ), “The Project of the Year” was the International Investment Forum in Sochi; ExpoForum CJSC was recognized as “The Organizer of the Year,” and two other nominations were won by the VKontakte Festival.

The second day was devoted to the development of business tourism in Saint Petersburg, modern methods of HR management in terms of improving the efficiency of event industry enterprises, and regional marketing via events: peculiarities of forming a positive image of the country and individual regions. At the plenary session “New Marketing. Events as an Efficient Marketing Tool,” foreign and Russian experts shared their vision of “modern marketing” and suggested various options for its promotion.

According to fond tradition, the concluding event of the second day involved the finals of the branch contest for young specialists of the meeting industry Event TALENTS 2016. The contest winner was Polina Sologub, who presented a project envisioning a new multitask application for potential event participants and visitors.

The Forum also featured an exhibition of technologies and suppliers of equipment and maintenance services – EFEA EXPO, a Business Networking Event and a Job Fair.