Documents issued by an official authority, or attested by authorised persons and being legally binding in a country, may only be used in another country after their legalisation in accordance with established procedure.
Currently, two types of legalisation are available: consular legalisation and apostilisation.

Consular legalisation refers to confirming the documents compliance with the effective legislation of their country of origin by attesting the authenticity of the official's signature, their capacity, and – in appropriate cases – the authenticity of a competent state authority's seal that such documents and legal acts bear for the purposes of their use in another country.

Consular legalisation is required for documents issued in countries that are not included in the list of signatories to the Hague Convention. For the latter, there is a simplified legalisation option - apostilling.

The consular legalisation procedure involves the following stages:
1) Preparing a notarised copy of a document;
2) Translating a copied document;
3) Notarising translation;
4) Attesting a document with the following three authorities:
а) The Ministry of Justice of the Russian Federation;
б) The Ministry of Foreign Affairs of the Russian Federation;
в) An embassy of a country in which a document is intended to be used. 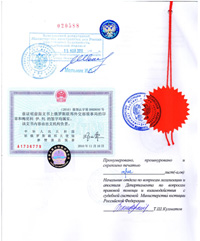 Advantages of cooperation with EGO Translating Company include:
• Consultations with expert managers and order acceptance on a seven-days-a-week basis;
• An invariably profitable combination of cost, term, and quality of services;
• Solution of even the most non-standard tasks;
• One year warranty for each translation;
• Strict confidentiality.