State program for “Maximum” rearmament by 2020

During his annual press conference held on 17 December 2015, Russian President Vladimir Putin declared that all targets assigned to the military industrial complex must be met, the crash in world oil prices notwithstanding. 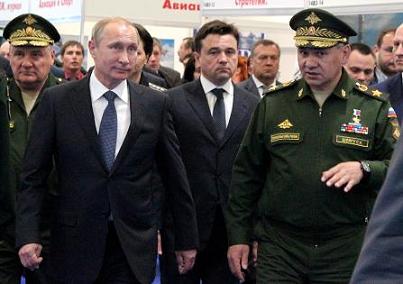 If not by the established deadlines – then at least on more reasonable terms. Let’s examine this and the other trends in the implementation of defence programs over the next five years.

The State Rearmament Program until 2020 (SRP-2020), adopted in 2010, sets out a vision of how the Armed Forces of the Russian Federation will look in 2020. The main goal of the current state rearmament program until 2020 is to increase the share of modern weapons and military equipment (WME) in the Russian forces to 70% by 2020. Data on the level of appropriations received by the different service branches is provided at the end of the article.

According to this information, the Navy will receive the highest percentage of funding earmarked within the scope of SRP-2020. The measure is aimed at supporting the Shipbuilding Program until 2050, which was adopted in 2014. Industry experts believe that these naval-construction outlays actually represent the primary reserve for some “budgetary maneuvering” under further the implementation of SRP-2020 and formulation of the next defence spending program. A situation in which the SRP-2020 calls for spending roughly RUB 5 trillion on the acquisition of WME for the Navy and a combined total of just RUB 2.6 trillion for the Army-Airborne Forces is simply unrealistic, both from the standpoint of the Russian Federation’s geopolitical situation as well as in the context of all historical experience.

On the other hand, the Russian Army still has to be rearmed. The T-72 and T-80 tanks, plagued by a low survival rate on the battlefield (due to the tendency of their ammunition to explode when hit by anti-tank weapons) must be replaced – such a sweeping modernization program could well emerge as one of the top priorities over the next decade. In this connection, a big advantage is offered by the creation of the Armata Universal Combat Platform. Some prototype and pre-production tanks in the Armata series have already been built, giving Russia the world’s most advanced tank and other series vehicles developed on its basis. According to various estimates, the mass production of the vehicles will not become possible until 2018-2020, at the earliest. Other promising technologies are the tracked modular platform Kurganets-25 and the amphibious wheeled armored personnel carrier Bumerang, featuring an 8x8 axle configuration.

All of which points to the competitiveness of the Army’s engineering capability in comparison with the advanced military vehicles made by foreign manufacturers. In this area, the RF Armed Forces also boast a number of promising innovations that are deserving of further development.

The situation faced by the RF Air Force is different than that being encountered by the Navy and Army: while combat planes and helicopters are certainly being produced for the Air Force, there have been difficulties in developing new weapons units. At the crux of the issue is the promising complex for frontline aviation, whose delivery for operational trials will only get underway in 2016. The state of affairs in the Air Force is complicated, and may necessitate the retargeting of allocated funds towards other, more priority projects.

The previous programs (SRP-2006 and SRP-2015) are widely viewed as a boondoggle due to the unstable economic situation and institutional reforms, which forced the resetting of their respective targets roughly five years after their entry into force. That failure notwithstanding, the 2015 program still revealed the first positive changes in the planning for ongoing development of the Russian MIC, associated with the country’s improving macroeconomic situation, increased defence spending beginning in 2005, and the transition to a consolidated system for the technical support of the RF Armed Forces. At the end of the current period, it’s already possible to assert that SRP-2015 was not accomplished in full, but that it managed to advance Russia’s technical equipping by a number of indicators nonetheless. What the 2020 program will lead to – only time will tell. *Data source: Center for the Analysis of Strategies and Technologies.